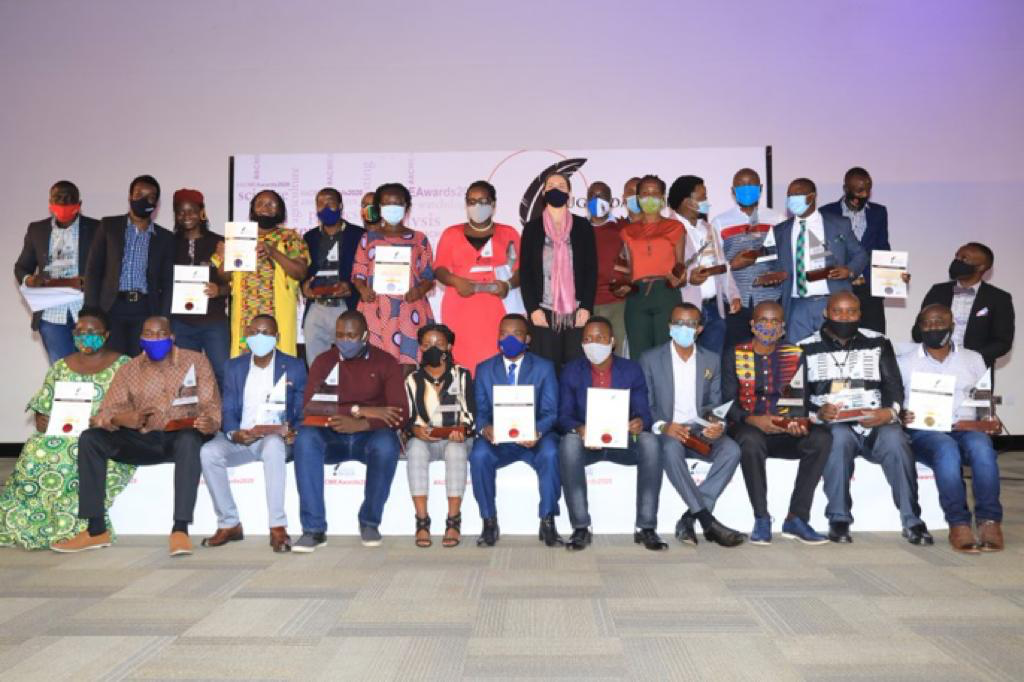 Initiated by ACME in 2014 with support from the DGF, the awards aim at improving the quality of journalism in Uganda by inspiring and recognizing excellence in reporting on public affairs issues.

Speaking at the ceremony, the chief guest, Dr Roswitha Kremser, Head of the Coordination Office for Development Cooperation, Austrian Embassy, Kampala, stressed that Uganda’s Constitution recognized the right to freedom of expression and access to information as not only fundamental in its own right, but also important for the protection of other basic human rights. She further noted that over the years, the country’s higher courts have repeatedly ruled in favor of upholding free speech and media. Based on this conducive environment, the media landscape in Uganda has expanded significantly over the last three decades and entails today more than 30 TV stations, 290 radio stations, in addition to at least 10 print news.

“In a rapidly changing environment and politically challenging times, the professionalism of journalists is more important than ever”, Dr. Kremser emphasised.

Dr. Kremser also called upon women journalists to take up all opportunities for impactful journalism. She noted that since women journalists face several challenges in the course of their work, they deserve recognition for having remained steadfast in a sector that remains dominated by men. Out of the 241 entries that were submitted to compete for the awards this year, women constituted only 16 percent.

In the same line, Nicole Bjerler, the Head of Facility at the Democratic Governance Facility (DGF) called upon newsrooms across the country to accord more opportunities to women journalists to expand their reporting portfolios to also cover more mainstream news. She noted that more can be done to bring out the plurality of opinions and diversity of voices, including women.

Bjerler also urged journalists to remain factual, fair and balanced in their reporting to attain public trust in the information shared.

“Fact-checking remains essential, and journalists are called on to abide by the highest ethical and professional journalists’ standards, as outlined by UNESCO and other professional bodies. This not only ensures accuracy and integrity of information, but also increases the standing of journalists,” she noted.

She underscored the importance of journalists being able to carry out their work without fear or favour and called upon all relevant actors to ensure the safety and protection of journalists so that they can deliver on their crucial role and mandate.

Dr. Monica Chibita, ACME Board Chairperson and Dean at the Faculty of Journalism and Mass Communication at Uganda Christian University, said that these awards are unique for they are happening in uncertain times of COVID-19, and virtual elections that have faced a lot of contestation.

“The media needs to question the mandate of the public in these matters to ensure inclusiveness and fairness, especially in the forthcoming campaigns and elections,” she said.

To view the full list of awardees, open this link:

END_OF_DOCUMENT_TOKEN_TO_BE_REPLACED

Mid-term Assessment of the State’s Progress in the Implementation of the Recommendations on HRDs under the 2nd cycle of the UPR
DGF Quarterly Newsletter: July to September 2020
Special Newsletter on DGF Implementing Partners’ Response to COVID-19, Issue 3, July 2020
Press Freedom Index Report 2019
END_OF_DOCUMENT_TOKEN_TO_BE_REPLACED