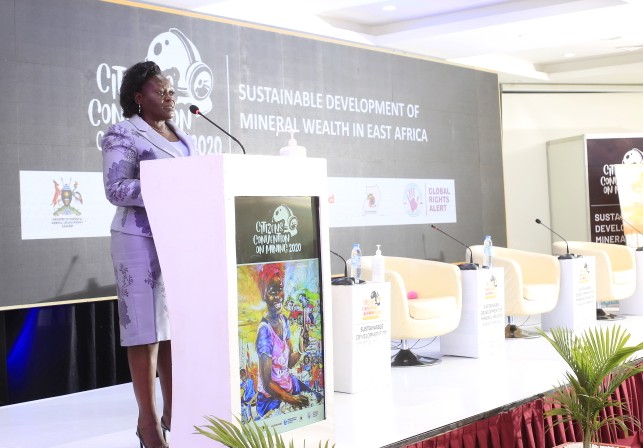 “The sustainability of any wealth resource is not dependent on the size of mineral deposits, but the deliberate decision by all stakeholders that citizens must be placed central where their rights and benefits are protected. If this is not done, there will be a rise of conflicts in communities, that may turn violent,” remarked Xavier Ejoyi, the Executive Director of ActionAid International Uganda (AAIU), speaking on behalf of the organisers of the 4th Citizens’ Convention on Mining, held on 24th September 2020 in Kampala.

The convention, held under the theme “Sustainable Development of Mineral Wealth In East Africa”, was jointly organised by Global Rights Alert (GRA), Advocates Coalition for Development and Environment (ACODE), ActionAid International Uganda (AAIU), and Transparency International Uganda (TIU), in partnership with the Ministry of Energy and Mineral Development, and the Uganda Association of Small Scale Miners.

Giving her remarks, Hon. Sarah Opendi, the State Minister for Mineral Development, noted that despite its vast potential, the mineral sector contributes only 1.4% of Uganda’s Gross Domestic Product. She further added that, as government, they are committed to strengthening the legal and regulatory framework to put the sector in order. Hon. Opendi also called on women in mineral rich areas to step forward and take the front seats in the mining sector.

Ms. Nicole Bjerler, the Head of Facility at the Democratic Governance Facility (DGF), noted that as part of the review of the Mining Act, 2003, several DGF implementing partners have been working closely with line Ministries, Departments and Agencies on the draft Mining and Mineral Bill, which was shared for input in 2019.

“As DGF, we are pleased that the new Mining and Minerals policy and legal framework will be bringing most people on board and is aligned to Uganda’s Vision 2040, the NDPIII and the UN Sustainable Development Goals,” she said, adding that “civil society organizations, including those supported by DGF, have done tremendous work to strengthen oversight, accountability and allocation of extractive revenues to achieve optimal and equitable outcomes for current and future generations.”

Ms. Bjerler further applauded the admission of Uganda to the Extractives Industries Transparency Initiative (EITI), in August 2020. “We look forward to the expected benefits of joining the EITI, including improved governance; improved revenue collection; an improved platform for stakeholder collaboration and engagement, and a great basis for public engagement,” she added.

The convention, which was held at Imperial Royale Hotel, was attended by representatives from government ministries, departments and agencies, civil society, academia, artisanal and small-scale miners, development partners and the media across the East African region. The convention provides an important annual platform for communities affected by the extractive industry developments and CSOs to interface with government officials and investors, with a view to identify and follow-up on key actions identified in the mining sector.

Access the report on the Citizens' Convention on Mining that was held in 2019 at: https://www.globalrightsalert.org/sites/default/files/Global%20Rights%20CCM%20Report%202019.pdf

The DGF supports GRA, ACODE, AAIU, and TIU in the area of strengthening citizen engagement for natural resources governance.

END_OF_DOCUMENT_TOKEN_TO_BE_REPLACED

Mid-term Assessment of the State’s Progress in the Implementation of the Recommendations on HRDs under the 2nd cycle of the UPR
DGF Quarterly Newsletter: July to September 2020
Special Newsletter on DGF Implementing Partners’ Response to COVID-19, Issue 3, July 2020
Press Freedom Index Report 2019
END_OF_DOCUMENT_TOKEN_TO_BE_REPLACED